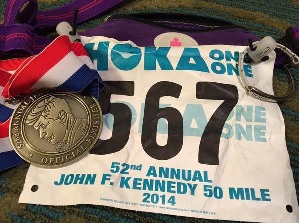 You may have heard I dedicated my first 50-mile run, the JFK 50, to Raynaud’s awareness. Many of those who heard about this via the Raynaud’s Association’s Facebook page asked about my strategy for staying warm. Here’s what I did (for more tips on endurance events, check out my blog post geared toward the non-Raynaud’s crowd).

In short, I gathered data. I forced myself to train in the conditions I might run, testing layering techniques and gear and making note of what worked and what didn’t. I was willing to throw out everything I thought I knew about myself and start with a blank canvas. I asked what I was feeling, where and why. And I tried to answer as specifically as possible.

The data showed I over-layered out of fear of being cold, and that I generate more body heat and sweat more than I thought causing a lot of my problems. The data showed my legs worked and felt better when exposed to the air. My arms did not. My arms, unlike my legs, are stationary, more or less stuck in a 90-degree angle for however long I’m running, limiting body heat and blood flow. But if I over-layered and my arms sweat, then the cold sweat would send shivers down to my fingers. Balance was the key.

By learning how I sweat and that it was sweat more than cold air that caused most of my problems, I was able to lessen the duration and severity of episodes.

I did use hand-warmers and throwaway sweats in the beginning of the run, when we were waiting to start and then walking up the initial climb to the Appalachian Trail because I knew that my body would not be generating enough heat to keep my extremities warm. The sweats were quickly discarded. For similar reasons I started with my heavier pair of glove-mittens. I ditched those around mile 20, when the weight of them and the warmers were making my fingers a bit too toasty and were starting to trap in sweat. I picked up a pair of thin mittens at mile 27 and ran with them on and off for the remainder of the run.

The last piece was mental. I knew I was more scared of the weather than the distance. I knew fear could work against me physically and mentally. So I had a pair of hand-warmers and alternate clothing options, including dry socks at three of the four support sites. I didn’t need them, save one pair of socks, but knowing they were there helped me relax and accept whatever the day had in store.

A Note of Thanks.

I was diagnosed with Raynaud’s in 2011; the symptoms first appearing during winter runs. Having not lived until then in a place with four seasons, real winter was new to me. I didn’t know that the color changes and numbness and throbbing had a name. I didn’t know it could be serious. So I continued to favor the cold roads over the monotonous treadmill. When I learned the name, Raynaud’s, I was more cautious to the point of fearful, shutting myself away in the long winters, relegating myself to the treadmill or not running at all. But it wasn’t until the winter of 2013 that I suffered severely, physically and mentally.

When first presented with the idea of the JFK50, it had nothing to do with Raynaud’s. My first reaction was “no f-ing way.” No way could I run that far in the spring, let alone in November. That fear and doubt were my first reactions, made me want to try. People better themselves when they rise to challenges not when they shirk from them.

Fear, anxiety and excitement coursed through me as I waited to register, and waited for the acceptance letter. As time passed and emotions swelled, I realized that this run could be about more than proving to myself that I could go the distance and any distance in winter air. It could be used to show others like me that Raynaud’s can be a characteristic, not a disability. It could be used to show those not like me what Raynaud’s is and what it does.

I could not have foreseen the result. I did not expect friends, family and strangers would respond with such compassion and support. I had no idea if the Bravelet I purchased would be the only one sold. I never dreamed so many of the Association’s followers would write comments and tweets of thanks or support.

It was these that helped me refocus and recommit when I started to doubt myself. They warmed me, propelled me, encouraged me onward and across the finish line. And so to all of you, I say thank you.

Editor’s Note:  You can show support for Rachel’s efforts by purchasing a Bravelets™ bracelet dedicated to Raynaud’s awareness.  $10 of every purchase is donated to the Raynaud’s Association.

Finally a whole group of people who know exactly what I’m going through & even tips and products that really help.  I can’t tell you how much it means to not feel all alone. by D. (Twitter Follower)

Finally People Who Know What I'm Going Through

I was diagnosed with Raynaud’s at age 16, I am now 41. Every day is a new adventure in keeping and staying warm, summer or winter. Thank you for this website. by E.G. (NY)

Hi, I’m glad I found this page, it helps to know that others suffer from this, too…Thank you for your page : ) x by S.C. (Facebook Fan)

Helps to Know Others Suffer, Too

I really value the Raynaud’s Association; it’s so nice to know that I’m not alone. by J. S. (OH)

I’m pleased to find this website. I’m learning more than I ever knew about my condition. Thank you. by R.Z. (PA)

I’m happy I have found this site and look forward to the new products to help us Frosties. by J.S.

Happy to Find This Site

Thank you for the info! First time I have been here, and it’s nice to have the ‘connection’ with others in the world! by J.F. (NY)

Thank You for the Info!

I am ecstatic that I found this association!  I did my usual engine search of Raynaud’s and came across the association for the first time and shared the information with my colleague as well.  by H.R. (VA)

Ecstatic I Found This Association!