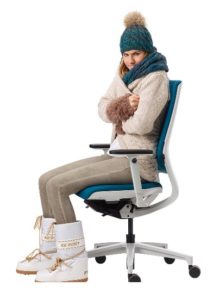 The same day we published the article “Workers Are More Productive in Warmer Offices” the New York Times published one titled “Can an Office Temperature Be ‘Sexist’? Women, and Science, Say So.”  The issue was sparked by the New York Gubernatorial race debate between Andrew Cuomo and Cynthia Nixon.  Prior to the event, Ms. Nixon requested the debate hall totemperature be set at 76 degrees.

The topic was so hot (sorry for the pun) that the above article was accompanied by one titled “Cuomo vs. Nixon Debate? It’s Already Heated (Literally).”  It seems Cuomo is known for preferring “deeply chilled conditions” for his public appearances.  So Nixon’s team was making a pre-emptive move to avoid putting her in an uncomfortable disadvantage.

Cuomo’s preference for chilly environs may be a strategic move.  I recall taking a negotiations class during a corporate retreat, and one of the strategies is to make the other side physically uncomfortable (too hot, too cold, no water available, etc.).  Unfortunately for Raynaud’s sufferers, it’s not that hard to make Frosties shiver.  Pending the season, just turn up the air, or turn down the heat.

But it’s good to know that this isn’t just a problem for Raynaud’s sufferers.  The history of cold offices goes back to the days when most office occupants were male, and the standard office attire included long-sleeve shirts, jackets and ties.  Frigid temperatures helped men overcome their discomfort in warmer seasons.  Meanwhile, women wearing lightweight dresses and skirts are covering up with sweaters and blankets.  Even though office dress codes have relaxed since building policies were set, it’s still a familiar scene today.

For more reading on the subject, here are several articles from our files, the New York Times and the Washington Post:

Summertime, and the Livin’ is Freezing

Can an Office Temperature Be ‘Sexist’? Women, and Science, Say So