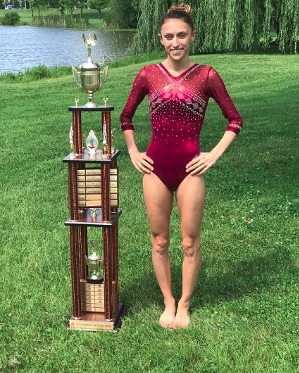 Good news! Lowell returned recently from the United States Trampoline Association (USTA) National Championships with some new hardware to add to her medal collection. She became the first woman in the USTA to land a skill called the “triple pike,” involving flipping over three times in a “piked” position.

She was named Athlete of the Year and won an award called the Nissen-Griswold Award (She was unable to lift the trophy due to her fingers’ numbness).

Kristle told us she finds summer to be even more challenging than winter at times when it comes to dealing with Raynaud’s symptoms. “The stadiums we compete in are huge and the warmer it is outside means the more air conditioning inside,” she says. With only a thin leotard to keep warm, Kristle finds air conditioning can set off a Raynaud’s attack. “I bring heat packs out on the floor with me to make sure I stay warm,” she says, noting, “But I did get minor frostbite on my ears from air conditioning.”

The 25-year-old gymnast points out that her biggest challenge is having an attack during competition. Unable to feel her hands or feet, she has honed her proprioceptive skills to compete despite the numbness. This gives her the sense of the relative position of her own parts of the body and strength of effort being employed in movement.

Preparation for Raynaud’s challenges is also part of Kristle’s routine outside the gym. She travels with heat packs and heated blankets for overly air-conditioned hotels. During the USTA nationals she had to change hotels because the one hotel booked was too air-conditioned for her comfort.

Kristle stresses that she’s thankful for how wonderful people in her life have been at accommodating her Raynaud’s. “I have the most wonderful coaches. Both of them give me their jackets when I’m cold at a competition. And they offer for us to sit outside at dinner in the heat even when I know they would much rather be inside,” she says.

The USTA, too, has been wonderful. “Everyone there is so understanding and kind. They let me use the outlets to warm up my heat pack and have allowed me to wear jackets on the competition floor.”

Kristle also has to make accommodations in her social life because of her Raynaud’s. She says being outside in 90-degree weather holding an ice cream cone can set off an attack. “The biggest setback with my Raynaud’s is that I can’t go swimming with friends in summer because the water is too cold,” she says. “I’m an adrenaline junkie and there is so much stuff I will most likely never be able to do because they involve cold water. If I didn’t have Raynaud’s I would go cliff diving, which would be really fun with all the flips I can do.”

Despite the challenges of Raynaud’s, Kristle hasn’t let them hold her back. Her goal? She wants to one day be the first person to do a back flip in Antarctica.

She imagines she might be the first Raynaud’s sufferer to visit Antarctica, a frozen continent not high on most Frosties’ bucket lists. But she’s undeterred by the cold. It’s the cost that gets in the way. She says it might take awhile to accomplish her dream because traveling to Antarctica is so expensive. “When I get there, I think I’m just going to run off the boat, do a back flip, then run back to the boat before I have time to have a Raynaud’s attack,” she plans.

Noting that Antarctica keeps a lists of “firsts” (first person to get married, first person to give birth, etc.), Kristle says it seems fitting to have a first back flip there. So she plans to start training for this goal during the upcoming winter. “Flipping with boots and a jacket on will weigh me down,” says the woman who hardly lets anything weigh her down!

One item she plans to bring with her to Antarctica to mark her feat? “I would like to put a Raynaud’s Association flag there,” she smiles.