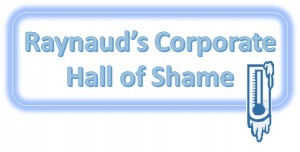 We’ve recently seen news on two companies creating uncomfortably cold conditions for their customers and employees and believe they deserve a place in the Raynaud’s Corporate Hall of Shame.

First on the list is United Airlines.  On June 12th, the airline stranded hundreds of London-bound passengers in a remote part of Canada after an emergency landing.  While the crew were made comfortable overnight in warm, comfy hotels, the passengers were left cold, hungry and confused in an unheated Goose Bay barracks building with nothing more than two blankets so thin they were described by passengers as sheets while the temperature was near freezing.   Here are a few links on the story:

The second corporate culprit is Wal-Mart.  The company has been keeping its air conditioning at artic temperatures and finally agreed earlier this month to raise the thermostat in response to overwhelming complaints from its workers.  Can you believe this?  The temperature in Wal-Mart ‘s 4,555 stores is centrally controlled by the firm’s headquarters location in Arkansas, absurd!

But wait, there’s more:   In researching the above story, we found that in January of 2014 Wal-Mart warehouse workers in Indiana went on strike to protest sub-zero temperatures.  Here are some quotes from the press:

…broken dock doors and lack of heaters leave the warehouse’s workers exposed to snow, rain, ice, and freezing temperatures. WWOC organizer Sean Fulkerson told Salon that the facility ‘”had torpedo [gas] heaters before Wal-Mart got the contract,” but “when they switched it over to a Wal-Mart facility they pulled out the heaters” because “they didn’t want to pay the gas bill.” Now, he charged, “people were getting written up for going to the bathroom and trying to warm their hands under their hand driers.”

Here are a few links to the Wal-Mart stories:

If you know or read about a company that deserves a place in the Raynaud’s Corporate Hall of Shame, please let us know!

Finally a whole group of people who know exactly what I’m going through & even tips and products that really help.  I can’t tell you how much it means to not feel all alone. by D. (Twitter Follower)

Finally People Who Know What I'm Going Through

I was diagnosed with Raynaud’s at age 16, I am now 41. Every day is a new adventure in keeping and staying warm, summer or winter. Thank you for this website. by E.G. (NY)

Hi, I’m glad I found this page, it helps to know that others suffer from this, too…Thank you for your page : ) x by S.C. (Facebook Fan)

Helps to Know Others Suffer, Too

I really value the Raynaud’s Association; it’s so nice to know that I’m not alone. by J. S. (OH)

I’m pleased to find this website. I’m learning more than I ever knew about my condition. Thank you. by R.Z. (PA)

I’m happy I have found this site and look forward to the new products to help us Frosties. by J.S.

Happy to Find This Site

Thank you for the info! First time I have been here, and it’s nice to have the ‘connection’ with others in the world! by J.F. (NY)

Thank You for the Info!

I am ecstatic that I found this association!  I did my usual engine search of Raynaud’s and came across the association for the first time and shared the information with my colleague as well.  by H.R. (VA)

Ecstatic I Found This Association!